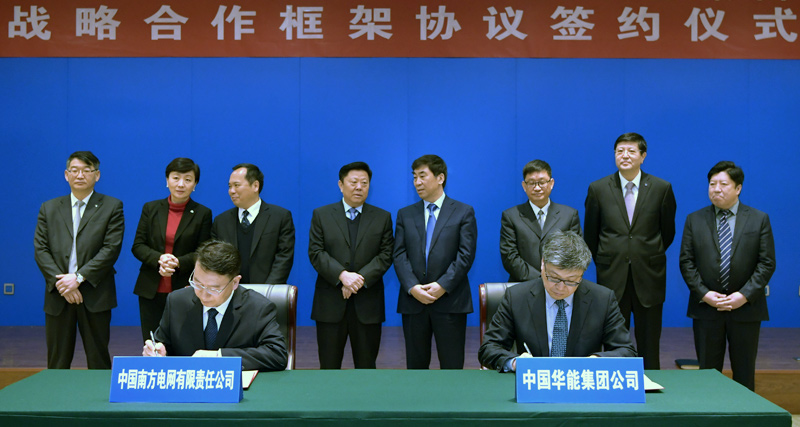 BEIJING - China Southern Power Grid (CSG) (http://eng.csg.cn) and China Huaneng Group are pleased to announce the formation of a new strategic cooperative framework agreement that will further implement China’s “Belt and Road” initiatives as well as expand the development opportunities for international business for both corporations.

CSG Chairman of the Board, Li Qingkui, and General Manager of China Huaneng Group, Cao Peixi, attended the signing ceremony.

Prior to the signing ceremony, the two sides held talks on deepening the structural reform of China’s electrical power system as well as promoting the industry’s “healthy development”.

He added that the agreement, “will improve the bilateral cooperation as we achieve new heights, which is an important indication that the company is implementing the country’s ‘Belt and Road’ initiatives as well as adapting to the energy development trends”.

Mr. Cao also said that he expects technologically advanced projects to gain cooperative results as soon as possible. He also said, “CSG can continue to support the distribution of hydroelectricity and wind power integration in Yunnan Province”.

On behalf of China Southern Power Grid, Mr. Li briefly touched on the long-term and sound bilateral cooperative relationship in areas such as the West-East Electricity Transmission Project.

He said power grid enterprises and power generation enterprises face, “shared situation and challenges, so they need to strengthen practical communication and cooperation, further deepen the reform of the power system, improve the structural reform to the supply side and promote research as they put forward recommendations on the optimization of the energy structure and the healthy development of the power industry”.

China Southern Power Grid will continue to play a positive role in implementing the country’s “Belt and Road” initiatives as well as creating mutually beneficial relationships – such as today’s agreement with China Huaneng Group - to promote power connectivity and power trade with the power grids organizations of neighboring countries and regions.